For more information about the 40th Anniversary Celebration of this program, click here. 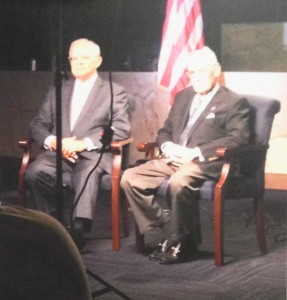 After the Cuban Revolution, many lawyers were exiled to America and especially Florida but were unable to practice the profession they had been trained and dedicated to in their homeland. At their urging in 1973, the Florida Supreme Court approved and UF Law developed a course of study to teach foreign lawyers the common law and give them a chance to enter the Florida Bar. Dean Joseph R. Julin assigned 13 professors to the program, made Julian C. Juergensmeyer the program director and began offering weekend classes.

Right after Fidel Castro came to power in 1959, Jose “Pepe” A. Villalobos arrived at a Cuba Supreme Court ceremony where lawyers were required to swear allegiance to “The Fundamental Law” as issued by the Council of Ministers. Villalobos had just earned his degree from the Universidad de Villanueva, and no sooner was it awarded than the regime made his qualifications dependent upon an oath. 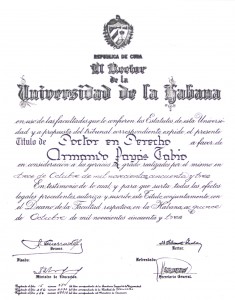 “I refused to swear allegiance to the constitution,” Villalobos said by telephone from his Miami law office at Akerman Senterfitt.

With a few choice words, he expressed his displeasure with the new document. Pro-Castro militiamen at the court used their fists to express displeasure with Villalobos. So he fled the island nation for Miami and took up a career as a roofer for Sears & Roebuck. In 1973, Villalobos enrolled in the UF Law Cuban-American Lawyers Program eventually becoming one of its 314 graduates.

In announcing plans for the celebration, UF Law Interim Dean George Dawson noted that all participants are invited, regardless of their career path.

“The lawyers, exiled from their country, were dedicated to the rule of law and the search for justice, and did everything in their power to retrain and restart,” Dawson said in a written statement. “Their efforts have inspired generations of lawyers, judges and law professors – Cuban and non-Cuban alike.” 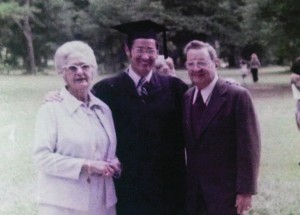 Speakers will include prominent Cuban Americans such as Florida Supreme Court Chief Justice Jorge Labarga (JD 79) and former American Bar Association President Stephen N. Zack (JD 71), whose Zack Endowment at UF Law provides financial support for the celebration. Labarga is the first Hispanic chief justice of the Florida Supreme Court and Zack is the first Hispanic president of the ABA. Villalobos will join UF President Kent Fuchs, UF Law Dean Laura Rosenbury, and UF Law Board of Trustees President Oscar Sanchez (JD 82) with Professors Berta Esperanza Hernández-Truyol and Fletcher Baldwin, who taught in the program that ran from 1973 until 1976. Additionally, Florida Bar President Ramon Abadin will also be an honored guest at the reception.

Villalobos almost didn’t get into that first class in 1973. The Florida Supreme Court had approved a course of study that would train foreign lawyers who had been admitted to the bar in their home countries. Because of his defiance on the day of his swearing-in ceremony, Villalobos was never admitted to the Cuban bar. Under the rules, he didn’t qualify for the Cuban-American Lawyers Program. After some impromptu lobbying, Villalobos got the chance to make his case before the Supreme Court, which ruled in his favor.

In addition to classes in Gainesville, organizers made arrangements for UF faculty to fly to Miami each week to teach because it was cheaper to fly the instructors down than to have hundreds of students fly to Gainesville. Upon his graduation, Villalobos passed the bar exam on his second try.

Remember that work he did as a roofer? One of his jobs took him to a cow pasture. It turned out that a newly elected state legislator named Bob Graham was the property owner. When he became governor, Graham appointed his former roofer to a judicial nominating committee, which he later chaired. Villalobos was elected president of the Cuban American Bar Association five years after being admitted to the bar and in April will be named a legal legend by the 11th Judicial Circuit Historical Society. Among the last of the program graduates to still practice law, Villalobos serves as of counsel for Akerman Senterfitt where he specializes in real estate in addition to government affairs and public policy.

“Only in America,” Villalobos said of his career. “It’s why anytime somebody asks me how I’m doing, I say, ‘I’m fine, I live in the United States of America.’”