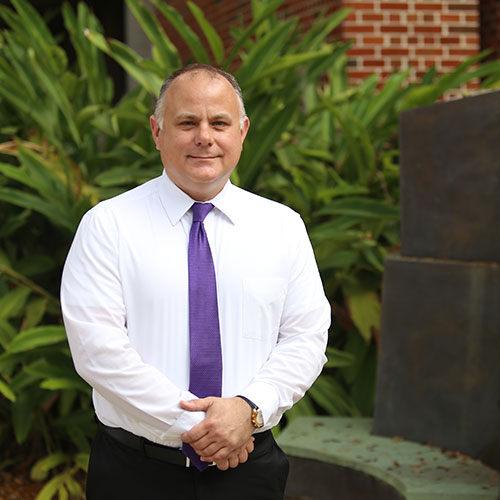 Christopher Vallandingham is Head of Collections and Professor of Legal Research in the University of Florida Levin College of Law’s Legal Information Center. He has worked at UF Law since 2000, with expertise in military law, intelligence law, and Florida territorial law. Since 2010, Vallandingham has served as a reserve officer in the United States Army Judge Advocate General’s Corps. His current rank is Major and he serves as a legal advisor to Task Force 76, which is a U.S. Army Reserve task force which responds to attacks upon the United States using weapons of mass destruction. He is currently the Chair of the Florida Bar’s Military & Veterans Affairs Committee. He previously served as an Arabic linguist in U.S. Army intelligence units. He was the co-founder and president of the International Intelligence Ethics Association and the co-founder of the International Journal of Intelligence Ethics. He taught for two years in a high school in Cairo, Egypt. Vallandingham has numerous published works including entries, books chapters, articles, book reviews and case histories. His work contains: the report “Combatting Targeted Disinformation Campaigns (Department of Homeland Security, 2019); the chapter “Territorial Courts” in Florida’s Other Courts: Uncommon Law in the Sunshine State (University Press of Florida, 2018); multiple entries in the two-volume The Central Intelligence Agency: An Encyclopedia of Covert Ops, Intelligence Gathering, and Spies (ABC-CLIO, 2015), the chapter “Tracking Down Legal Sources on Prestatehood Florida” in Prestatehood Legal Materials: A Fifty-State Research Guide (Haworth Information Press, 2005) and “The Ethics of Spying: A Review of the Literature” in the Defense Intelligence Journal. He earned his J.D. degree from UF Law.