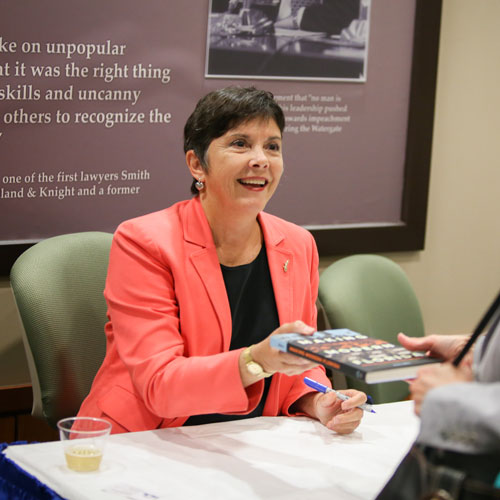 Mary Adkins is a Master Legal Skills Professor at the University of Florida Levin College of Law. Adkins teaches legal writing. In addition, she is faculty liaison to the First District Appellate American Inn of Court, and has presented nationally matters related to legal writing. She is Immediate Past Chair of the AALS Section on Legal Writing, Reasoning, and Research, and serves on the Board of Directors of the Association of Legal Writing Directors.

Professor Adkins has researched the history of the 1968 Florida Constitution and its revisions and has presented dozens of times on Florida constitutional history. She has published two books: Making Modern Florida: How the Spirit of Reform Shaped a New Constitution, in 2016, and Chesterfield Smith, America’s Lawyer, in 2020. Her co-authored casebook on Florida Constitutional Law will be published this year. She has also published several articles on Florida constitutional history and constitution revision and has served as an expert witness regarding the history of the Florida Constitution. She has conducted numerous oral history interviews of Florida legal, political and historical figures and is an executive board member of the Florida Supreme Court Historical Society. Prior to joining UF Law Adkins worked in private practice. She earned her B.S.J., M.A., and J.D. from the University of Florida.