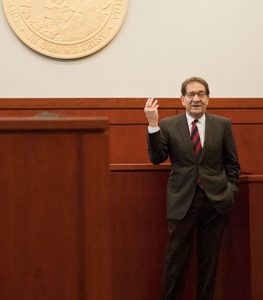 When Fredric G. Levin (JD 61) delivered the address at UF Law’s commencement on May 15, it was the first time the law school’s namesake has addressed the graduating class. A webcast of his speech is available to view on UF Law’s website at www.law.ufl.edu.

Levin, a shareholder in Pensacola’s Levin, Papantonio, Thomas, Mitchell, Rafferty & Proctor, P.A., is an acclaimed personal injury trial lawyer and philanthropist who donated $10 million to UF Law in 1999, at the time the largest cash gift ever to the University of Florida. It was also the largest cash donation ever given to a public law school.

Levin has held the record for the largest jury award at various times during his 55 years as a practitioner. His most recent honor was being named Trial Lawyer of the Year on April 21 by the National Trial Lawyers, a nonprofit organization dedicated to recognizing exceptional trial lawyers as crusaders for American justice.

In 1993, Levin drafted and was instrumental in passing the Florida Medicaid Third Party Recovery Act. That legislation opened the door to multi-billion dollar tobacco industry settlements nationwide in which states recovered the costs they incurred in treating the medical conditions of smokers.

Levin was diagnosed with lung cancer earlier this year. After treatment he was declared “cancer free,” Levin said during his Trial Lawyer of the Year acceptance speech. The award presentation can be seen here.

Affirming our Commitment to the Rule of Law