Land-use legal solutions in the era of sea-level rise 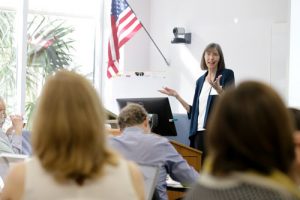 Few seaside beachgoers may realize that the sandy shores they enjoy are veritable land-use and environmental “battlegrounds,” as described by UF Law Professors Alyson Flournoy and Thomas Ankersen (JD 86) in a UF Law faculty blog post.

In Florida, for example, the wet-sand beach, or the area between the mean high-tide and low-tide water lines, are sovereign submerged lands, held in trust by the state for all Floridians.

Now the modest blog post is blossoming into an academic article by Flournoy, and with Ankersen, director of the UF Law Conservation Clinic, a Jan. 20-21 workshop at UF Law. It brought together an interdisciplinary team of academics and other experts to discuss the issues of sea level rise in the context of public rights use and access.

The dry-sand beach is typically privately owned, but citizens may have the right to use the beach based on common law doctrines of custom and prescription.

But now that battleground is shifting. The line between dry-sand and wet-sand is moving as sea level changes across years and decades, with the practical effect of shrinking the private landowner’s stake. The complex ways that the dividing line between public and private ownership are adjudicated grows even more complex as the interests of the state collide with the interests of the landowner.

It is a conflict that UF Law’s environmental and land-use law scholars are trying to mediate with a new legal framework.

Flournoy, a UF Alumni Research Scholar, is developing a scholarly article exploring how to apply common law property doctrines in a context of sea level rise that will be published in the Vermont Law Review. The workshop brought together experts to use scenario analysis to explore the impact that adaptive governance could have as we respond to the broader set of challenges posed by sea level rise.

“The hope is that this will provide some useful analysis for courts and local governments to find ways to align public and private values as they apply to common law and additional legislative revisions to address sea level rise,” Flournoy said.

Flournoy recognizes the daunting nature of her task and that her research won’t actually stop the seas from rising or protect property owners from losing out as water encroaches. So what motivates her to pursue this research?

“The reason I’ve been focused on it and sort of obsessed with these common law doctrines is that they provide the backdrop against which local government policies are going to be developed,” Flournoy said.

One of her biggest challenges is the issue of uncertainty, which, according to Flournoy, is already coming into play as landowners and governments try to determine the effects of sea level rise on people’s rights.

“It’s bad for landowners and users of the beach, and can lead to social transaction costs in terms of litigation to determine how these doctrines apply,” Flournoy said. “For local governments, it creates uncertainty because they don’t know the baseline against which any legislative change will be measured.”

Also at play are the doctrines of accretion, in which the boundary migrates with changes in the mean high-tide water line, and the doctrine of avulsion, in which the boundary remains fixed after quick changes, such as those caused by a storm surge from a hurricane. While these doctrines already tend to promote uncertainty and litigation, the problem is magnified in the context of sea level rise. Flournoy asks in her research how to apply very old law in an era of changing technology, new information and greater access to information, and significant change to environmental circumstances.

Herein lies the problem, which even Flournoy acknowledges will create lose-lose situations for property owners and the public going forward. Flournoy points out that “with respect to losses, that’s not something the law is causing – that’s what the sea is causing.”

Flournoy hopes that her research project will provide stakeholders, such as landowners, governments, and businesses, greater clarity about how the common law should be applied.

“For example, landowners who want to buy or sell real estate along the coast need to understand how sea level rise may affect their investment over the next 30 to 50 years,” Flournoy said.

And don’t forget the tourists.

“Businesses, government, and citizens need to try to understand the impact sea level rise may have on Florida’s tourism economy and how it will affect the ability of citizens and tourists to enjoy Florida’s beaches,” she said.

“As local governments put increasing time and resources into adaptation planning to meet the challenges of sea level rise, they can benefit from clarity on the common law backdrop against which they are acting, whether they want to engage in land acquisition, regulation, infrastructure investment, or disaster planning,” Flournoy said.

For local governments to intervene, the exercise of eminent domain will almost certainly be part of their toolboxes. However, this could pose a problem in the context of takings. UF Law Professor Michael Allan Wolf, Richard E. Nelson Chair, has written extensively on the subject of takings and sea level rise.

“The problem is that takings jurisprudence poses significant potential barriers to sea level rise responses by government,” Wolf said. “So that any response the government has – whether it is adaptation, mitigation, or something else – the people have to keep in mind the brooding omnipresence of takings.”

Flournoy poses the following scenario as a classic example of a situation where takings may come into play.

“The state might deny a permit to build a sea wall because doing so would cause increased erosion for neighboring property, or because there is no way to design the structure to withstand anticipated storm surges, creating both health and safety risks if the structure is overtopped,” Flournoy said.

“When these decisions occur, landowners who experience adverse impacts may simply accept the decision. But some will likely seek to prove that the regulatory action, rather than sea level rise, deprives them of substantially all of the economic value of their property and that they should be compensated,” she said.

The research attempts to figure out less risky ways to provide clarity in the future. One way is a framework for courts to take the lead. As Wolf points out, this may once again create roadblocks in the guise of takings.

“Flournoy would like the state high courts to reinterpret the common law in responsive ways, but that potentially raises the issue of judicial takings,” Wolf said. “But I think it’s provocative, looking at how the common law can evolve.”

Another alternative is to provide the proverbial “carrot” in the form of incentives instead of the “stick” of regulatory mandates. Flournoy thinks that common law incentives could spur near-term action such as through buyouts at fixed property values when the mean high-tide line reaches a certain point. Landowners are guaranteed the buyout only if they agree to comply with conditions, such as granting a rolling easement for public beach access.

For the academics, it will “broaden our thinking about possible outcomes in light of these uncertainties,” Flournoy said.

For the workshop, Flournoy and Ankersen brought legal scholars from Florida and other coastal states, such as California, Virginia and North Carolina, as well as experts in the fields of land use planning, economics, coastal engineering, policy and governance. She and Ankersen worked with the Florida Climate Institute, a multi-disciplinary network of national and international research and public organizations, scientists and individuals that are hosted at the University of Florida. The workshop was funded by the Florida Sea Grant and the Frederick and Victoria Leonhardt Family Endowment for Law to the UF Law Environmental and Land Use Law Program.

Ankersen and Flournoy will be drafting a report that pulls together four narratives describing alternative futures that the workshop participants envisioned, as well as the policy paths that led toward these futures. They hope this information will help to inform decisionmakers, providing new tools to help shape responses to sea-level rise.

Notwithstanding the impossibility of making precise predictions about the timing and extent of sea-level rise, Flournoy notes that “the fact of sea-level rise is undisputed, and the science provides considerable certainty about the general trajectory we are on. Thus we can mitigate some of the risks if we plan ahead.”

Meanwhile, Ankersen is working on a project to determine whether voluntary sales of conservation easements by coastal property owners is an effective tool to help protect critical habitat for endangered sea turtles that nest along Florida’s east coast beaches. The project is funded by the National Fish and Wildlife Foundation, the Sea Turtle Conservancy and the Disney Conservation Fund.

“One of the things that is challenging about it is that we know it’s happening,” said UF Law Professor Mary Jane Angelo, director of the Environmental and Land Use Law Program and a University of Florida Research Foundation Professor and Alumni Research Scholar. “But it’s happening in such small increments that it’s not like most environmental crises that gets everyone’s attention, like when we had to deal with water pollution because rivers were on fire.

“You can’t really reverse the problem itself, so it’s more about how do we adapt to the problem,” she said. “Even if we stopped emitting greenhouse gases right now, the sea level is still going to rise. And it’s just going to keep getting worse.”